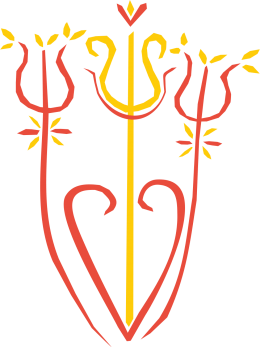 In the Polish section of Spiš, Polish, Slovak, Hungarian, German, Russian and Wallachian cultural elements come into contact. This wealth gave rise to the definitive appearance and variants of the Spiš costume, making it appealing and original. Three variants of the folk costumes worn in Spiš can be distinguished: a Jurgów, a Kacwin and a Trybsz one. The Jurgów variant covers the following villages: Czarna Góra, Jurgów and Rzepiska. The Trybsz variant: Dursztyn, Krempachy, Nowa Biała and Trybsz. The remaining places in Spiš - Falsztyn, Frydman, Kacwin, Łapszanka, Łapsze Niżne, Łapsze Wyżne, Niedzica - are reckoned to be representative of the Kacwin variant of the Spiš costume. Currently, in some villages the Spiš costume is being replaced by the Podhale one (Rzepiska, Łapszanka, Trybsz), while in others both the types are recognised. Until the end of the 19th century the traditional costume was made of natural materials available in the household: flax, wool and leather. With the advent of factory-made fabrics such as janglia, barsian, tybet, cretonne, silks, woollen fabrics, they began to be purchased in Spiš towns (e.g. Kežmarok), and after 1920 - in Nowy Targ.

The Jurgów variant of the Spiš costume worn in the villages located closest to the Belianske Tatras is quite unusual, characterised by rich ornamentation of both men’s and women’s outfits. Instrumental in the development of this variant was the highly advanced herding culture, as well as the proximity of the neighbouring Podhale region, which can be seen particularly in the men’s costume, which bears some resemblance to the men’s costumes worn in Ždiar and Lendak in Slovakia.A typical women’s festive costume was composed of a white, linen, highly pleated blouse with a bezprzyramkowy cut, with long sleeves decorated with black or brown embroidery with floral or geometrical motifs (cross-stitch). The bottom section of the sleeve is trimmed with a embroidered ruff or a cuff with hemstitch and forbótki (lace). Young girls also used to wear blouses with short, billowy sleeves, girded around with red ribbons (called trybskie). The most characteristic skirt was the so-called suknia (a dress) of red janglia, that is fine cloth, at the bottom decorated with golden binding (treska). The same material was used to make kabotek, that is a bodice with a characteristic tooth-like flap at the front and at the back, trimmed with golden binding and fastened with hooks and eyes. Over the dress worn was a white, thin zapaska (an apron) decorated with hemstitch and forbótki. The most festive version of the women’s outfit included rąbkowe (fine homespun linen) fartuchy - very ample skirts made of fine linen, sometimes featuring woven patterns. Underneath the fartuch (singular of fartuchy), one or two wide petticoats called spodniki are worn. The outfit was complemented by red coral beads and ribbons, as well as calf-length boots or kierpce. A married woman's tybet mob cap was distinctive with its characteristic tooth-like flap over the forehead, decorated with a pleated ribbon, as well as a thin kerchief tied under the chin and a rąbkowy rańtuch (a kind of shawl) flung over the shoulders. An everyday version of the outfit included: a blouse with short, narrow sleeves, a coloured, tybet lajbik, a thin, plain or daintily patterned skirt (kartunka), and a (white or black) zapaska (an apron). In winter, an embroidered serdak (a jerkin) used to be worn. In olden times, it was usual to wear sheepskins; they were flared from the waist down, decorated with red leather and cloth appliqués (the sheepskin was an obligatory garment during a wedding ceremony (a bride who could not afford it had to borrow one).

Typical men's attire was composed of a white, linen shirt with a small collar, fastened under the chin with a metal clasp. These days, the shirt sleeves are straight and wide (although not as wide as they used to be) and decorated with 2-3-centimetre-wide hemstitch. The shirt shoulders are reinforced with pieces of linen, and the festive trousers feature a hemstitch along the slit at the front. Sukniane portki (cloth trousers) with red side stripes are embroidered around the slits; the embroidery includes ślimocki, a heart motif, dainty flowers. Portki used to be more modest, decorated along the seams with red-navy cord and a simple motif, usually krzesiwko (flint); in time, embroidery came to be extended. The outfit was complemented by a wide, leather bacowski (senior shepherd-style) belt fastened with several buckles, featuring geometrical embossments and studded with little tacks, or by a long (about 2 metres) narrow, loosely-hanging belt, leather kierpce, a black, felt hat with a brim, decorated with kostki on a red leather strap or retiaska (a brass chain), as well as a richly decorated jerkin (called serdak). Serdaki used to be made of white sheepskin and modestly decorated; later on, dark-brown serdaki, richly embroidered with floral motifs and eyes on a peacock’s tail featuring virtually all over the back (embroidery of Liptov origin) began to be worn. At the front, serdaki feature region-specific kiecki, that is pompoms of colourful wool. Another type of outer garment was a short sukmana of brown cloth, decorated around the seams with yellow and red cloth, and tied under the chin with a broad, red ribbon. A characteristic garment worn by wedding best men (pytacy), uncommon in neighbouring places, is a hat with the so-called drużbiarski (best man's) feather, that is a wide-stretching bunch of approx. 120 stalks of straw, pieces of cloth, finished at the top with little bunches of little goose feathers.

The Trybsz variant of women's costume is composed of a linen blouse with a bezprzyramkowy cut, tucked and with short sleeves. Ancient blouses were characterised by strips of red thread set in the upper sections of the sleeves. Newer blouses do not have red strips on the sleeves, but standing collars with lace under the chin. Blouses with short, puffed sleeves with lace are tied around with red ribbons above the elbow. The oldest type of skirt was the red kanafoska made of striped linen woven of cotton thread with an admixture of linen thread (sometimes black or blue). At the front, where an apron was worn, the so-called przodek was set it; it was made of linen (to economise on precious material). Skirts were also made of plain satin or silk with a set-in bodice of the same material. Skirts of coloured, flowery tybet appeared in a later period. The function of the bodice, just like with the Jurgów variant, was fulfilled by kabotki of red janglija (fine woollen cloth) with golden or green binding, as well as velvet lajbiki decorated with white cord, or lajbiki made of tybet, modestly decorated (most often with yellow or green ribbon). Lajbiki are fastened with buttons, and finished with kaletki (tooth-like flaps) at the bottom. Lajbiki worn on as a complement to the festive costume, or at weddings, are very ornamental and light-coloured. Over skirts worn are white, black or navy zapaski trimmed with lace of the same colour. In the Trybsz variant, just like the Jurgów one, well-off women would wear mob caps and headscarves, and earlier - also rańtuchy (homespun linen shawls). They also used to wear kerchiefs called odziywacki, and in winter - white sheepskins. In general, calf-length boots with red leather strips at the top are worn.

Men’s costume comprises a white, linen or cotton shirt with sleeves gathered into cuffs, a little collar and slit trimming decorated with whitework or lace. Trousers - called portki - are made of white cloth and decorated around the slits and along the seams with loopy trimmings (after the Hungarian military fashion), the so-called cyfry made of red-navy, twisted wool. The Trybsz portki have close-fitting legs in the bottom section. Portki used to be complemented by long (approx. 2 metres), narrow, leather belts decorated with metal buttons. Occasionally, opaski were worn; they resembled the ones worn in the Jurgów variant, but were narrower and fastened with two buckles. Shepherds and young shepherds would wear belts as well. The most characteristic element of men’s costume is a green waistcoat called lajbik, made of fine, green cloth (janglija). Waistcoats are short, decorated with chain stitch of red and yellow wool (featuring floral motifs, usually tulips). At the front, there are three rows of flat, metal buttons on either side. A brown sukmana of the Trybsz variety is long and reaches below the knees. At the front and on the sleeves, it is decorated with motifs resembling little parzenice (heart-shaped patterns) in yellow and red, and serrated appliqués of red cloth around the standing collar. Black, felt hats with broad, turned-up brims are decorated with red ribbon (mainly ones worn by unmarried men). Kierpce are an older type of footwear; they were superseded by calf-length boots resembling Hungarian officer’s boots.

The Kacwin variant of the Spiš costume is very similar to the Trybsz one.

Women’s costume comprises a white blouse with a standing collar, long sleeves, wide ruffs gathered into lace at the cuffs (śtikeraj) or short, puffed sleeves tied around with red, silk ribbon. Kanafoski were the oldest forms of skirts made at home. The beginning of the 20th century saw the advent of monochromatic skirts made of thin woollen fabric, the so-called śtofki, as well as ones made of cretonne - the so-called kartunki. A festive type of skirt was kidel gradowy, that is a white, damask skirt. These days, apart from thin, monochromatic skirts, flowery skirts made of tybet are worn as well. Underneath top skirts, women usually wear three, wide and highly starched petticoats called spodniki. A fartuch, that is a lace-decorated apron, is worn over a skirt; unmarried women wear white fartuchy, while older women - black ones. Lajbiki with flaps in the form of a strip of fabric arranged in small tucks were sometimes stitched together with skirts. Lajbiki of black, green or dark-red velvet (barsiań) or colourful tybet fabrics are most popular. They are lajbiki fastened with buttons, decorated with white cord arranged in ornamental motifs of mirwa or gadzik (the so-called lajbiki sznurowane - ‘corded lajbiki’). The other elements - mob caps, kerchiefs or calf-length boots - are practically no different from the Trybsz variant.

Men's costume is characterised by cloth trousers with the co-called borytasy (hussar trimmings arranged in loops, made of red-navy, woollen ribbons). The portki legs are wide and have even ends at the bottom. Through the trousers’ upper hem, a narrow, leather belt called rzymiń was threaded; its visible part was decorated with little metal caps or buttons. Fastened with buttons at the front, the white shirt is not different from the Trybsz variant, just like the lajbik, that is a green, cloth waistcoat with a standing collar, decorated with metal buttons, and red and yellow wool embroidery. The back of the lajbik has an embroidered date of production, and the front, around the outer rows of metal buttons, features woollen chwasty (tassels), the so-called kistki. In length, brown sukmany reach below the knees and are decorated along the front edges and on the cuffs with appliqués of white and red cloth spots arranged in triangles with the base in the shape of a red, embroidered tulip. White, ornamental sheepskins and serdaki (jerkins) of dyed leather used to serve as outer garments as well; they are no longer worn. The so-called węgierskie (Hungarian-style) hats with turned-up brims and wrapped around with red ribbon, as well as calf-length boots look the same as the ones worn in the Trybsz variant.